Koen De Leus, Chief Economist, and Philippe Gijsels, Chief Strategy Officer, present their macroeconomic outlook for 2020 and explain how it is translated into the investment strategy of BNP Paribas Fortis. 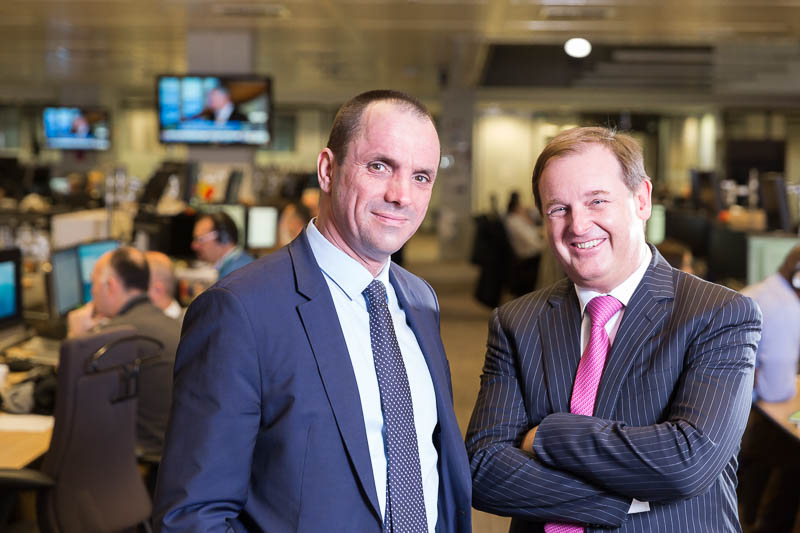 We expect a further slowdown in growth in the largest economies next year. This is the result of a de-globalisation shock arising from the policy conducted by US President Donald Trump. For Europe, it is the third shock after the 2008 subprime crisis and the 2012 banking crisis. Given its high dependence on exports and weak internal demand, Europe is suffering severely from the global slowdown in growth.

But not only Europe is groaning under the increased uncertainty about US policy. US growth is also gradually slowing down. Obviously, China is another victim, currently in the eye of the trade storm. It is quite remarkable that the Chinese government is so reluctantly supporting the growth. The Chinese authorities seem to be accepting the slowdown and are mainly focusing on long-term stability.

Koen De Leus, Chief Economist at BNP Paribas Fortis: “Stabilising debt and curbing the shadow banking system are top priorities for China. The world’s growth engine is shifting one gear down, and the effect can be felt across the globe.”

The supply of savings has increased since the 1970s as a result of growing inequality and the ageing of the population. In addition, the demand for deposits has fallen. The structural decline in productivity and population growth is depressing the return on invested capital, which causes companies to invest less. The combination of these developments caused the equilibrium interest rate to fall by 7 percentage points. On the other hand, governments pushed debts up worldwide and thus had a greater appetite for savings. The governments also developed a better social security system, as a result of which citizens had to set aside a little less. However, the net effect of all long-term trends taken together on real equilibrium interest rates still remains at a decrease of 3 percentage points. A rapid reversal of these trends, and therefore a structural increase in the equilibrium interest rate, is currently not in sight.

Due to the extremely low interest rate, the question remains whether the negative effects of the current deglobalisation shock should not be dealt with otherwise. The uncertainty will not disappear as a result of even lower interest rates. We need to boost the economy in a different way.

Several elements could argue in favour of an expansive tax policy. Firstly, the real interest rate in most European countries is negative. Savers are losing purchasing power, but the government can borrow at this negative real interest rate and make up for its investment arrears of the past decades.

Secondly, the timing is perfect. The positive growth effect of public investments is much greater if the central banks do not raise the interest rates. The European Central Bank has made it clear that this will not happen in the coming years. The effect can also be felt better in difficult economic times. After all, in such periods, unemployment is higher and therefore sufficient workforce is available. In the case of large public works, these workers will not be taken from the private sector (“crowding out”), which would reduce the growth effect.

Koen De Leus: “The risks also seem to be smaller than in the past. Our fiscal score card indicates that all countries recorded significant improvements since the crisis, not in the least thanks to the lower interest rate. Belgium also saw an improvement of its fiscal position, although today there is the problem of the increasing budget deficit. Current income and expenditure must be balanced. Once this is structurally solved, room must be created for extra long-term investments."

These investments should provide a structural increase of Belgium’s growth potential. Our FutureProof index measures how Belgium does compared to other EU countries in terms of productivity, labour market, government and environmental factors. Last year, Belgium climbed one place in the FutureProof index, but is still only 15th of the 28 EU countries. The labour market with a very low participation rate and the second highest vacancy rate (vacancies we are unable to fill) in Europe remains our weak spot. The potential is here. It is up to a new federal government to exploit this potential with a clear long-term vision.

2019 has been a grand cru year in terms of stock exchanges. The losses of a very difficult second half of 2018 were more than compensated. It is very important to recognise the huge impact of the actions of the central banks, with of course the Federal Reserve in the lead, closely followed by the European Central Bank. In the second half of 2018, the global economy operated more than adequately. In addition, corporate profit growth was very strong. However, the geopolitical uncertainties and the rise in US interest rates caused a very negative market sentiment on the equity markets.

We started 2019 with three Federal Reserve rate hikes in the offing. At the end of the year, however, the opposite is the case: there have been no less than three cuts. These reductions, combined with the fading geopolitical uncertainties such as the trade wars and Brexit, have given the market wings.

Philippe Gijsels, Chief Strategy Officer at BNP Paribas Fortis: “If the central banks continue to flood the market with liquidity, and if the Americans and the Chinese make a trade deal, confidence in the real economy should be able to rise again. This would allow us to extend the economic cycle, which is already long, a little further. Past experience has taught us that rising interest rates are much more important to equity markets than a strong economy and good business performance.”

If there is no recession and monetary policy remains flexible, there could still be some good stock market moments in 2020. Our analyses clearly show that bear-markets almost always coincide with or precede recessions. In view of the presidential elections, Donald Trump will do everything in his power to avoid a recession in 2020. If successful, a bull-market could emerge that will not only be the longest, but possibly also the strongest in financial history. After all, there is still a lot of money on the side-lines. And investors are certainly not euphoric, which is often seen in cases of long-term peaks.

Against the background of a rising stock market and a (slightly) recovering economy, long-term interest rates may rise a little. But the quantitative easing will limit that rise. The US dollar is still overvalued, but remains the world’s reserve currency. As long as equity markets continue to perform well and the interest rate difference favours the world's largest economy as it does now, the decline will remain rather limited.

Well-functioning stock markets, a recovering economy, slightly rising interest rates and a dollar that remains reasonably strong: these elements have a negative effect on gold. But real interest rates remain very low and central banks will continue to diversify their reserves in favour of the precious metal.

Philippe Gijsels: “We believe that the bull market in gold is slowing down somewhat, but that it will certainly remain intact. It can definitely stay in the portfolios.”

Maybe 2020 will be the year when silver and platinum will start to catch up. As far as oil is concerned, we do not see too much of a decline. However, there is still an oversupply. So without a geopolitical shock, we don’t expect miracles to happen for oil either.

Since the end of the 2008-2009 crisis, value shares have fallen considerably behind compared to growth shares. Over the same period, growth markets have lagged spectacularly behind the more mature markets. We believe that there is a real chance that these long-term trends may reverse in 2020.

But the theme of 2020 may come from an unexpected source. Both Mario Draghi and his successor Christine Lagarde have already indicated that the central banks’ tank for boosting the economy is almost empty. It is now up to the governments to take over part of the work.

So we might be on the brink of a paradigm shift, where fiscal stimulus will complement the monetary story. That would also help prolong the cycle. In the long run, and we are looking beyond 2020, it would accelerate inflation and could finally raise the interest rates. When Keynes wakes up from his hibernation, it is not a bad idea as an investor to look at a number of infrastructure-related investments. It promises to be an interesting year.


Higher government borrowings in the next recession? - Koen De Leus

Gold: a trusted investment for every portfolio - Philippe Gijsels

BNP Paribas Fortis (www.bnpparibasfortis.com) offers the Belgian market a comprehensive range of financial services for private individuals, the self-employed, professionals, companies and public organisations. In the insurance sector, BNP Paribas Fortis works closely, as a tied agent, with Belgian market leader AG Insurance. At international level, the Bank also provides high-net-worth individuals, large corporations and public and financial institutions with customised solutions, for which it is able to draw on the know-how and international network of the BNP Paribas Group.

BNP Paribas (www.bnpparibas.com) is a leading bank in Europe with an international reach. It has a presence in 72 countries, with more than 202,000 employees, of which more than 154,000 in Europe. The Group has key positions in its three main activities: Domestic Markets and International Financial Services (whose retail-banking networks and financial services are covered by Retail Banking & Services) and Corporate & Institutional Banking, which serves two client franchises: corporate clients and institutional investors. The Group helps all its clients (individuals, community associations, entrepreneurs, SMEs, corporates and institutional clients) to realise their projects through solutions spanning financing, investment, savings and protection insurance. In Europe, the Group has four domestic markets (Belgium, France, Italy and Luxembourg) and BNP Paribas Personal Finance is the European leader in consumer lending.BNP Paribas is rolling out its integrated retail-banking model in Mediterranean countries, in Turkey, in Eastern Europe and a large network in the western part of the United States. In its Corporate & Institutional Banking and International Financial Services activities, BNP Paribas also enjoys top positions in Europe, a strong presence in the Americas as well as a solid and fast-growing business in Asia-Pacific.